Archiv bezpečnostních složek Two Destinies that Went through the Fire

Two Destinies that Went through the Fire

Court files from the collection of the former so-called Study Institute of the Ministry of the Interior No. 141, German courts in the „Reich“, went a long way after they had been created. Nowadays they belong to the most often requested archival materials of the Security Services Archive. They describe the tragic destinies of individuals who were tried by the courts in Germany in the years 1938–1945 not only for criminal offences, but mainly for their activity against the Nazi Germany. They often paid the highest price in the political trials.

During the movement of the Allies through the German territories, a part of these files had been preserved. In the years 1956 and 1957 they were handed over to Czechoslovakia from the German Democratic Republic. Soon afterwards the files received basic archival treatment and were catalogued. Some of the files were apparently damaged by moisture and rubble. Some of them were unfortunately damaged or destroyed by fire.

Such is the case of two of these files. The condition of the signature 141-173-10, stored in a solid cover, was identified in May 2020. The damage caused by fire was so extensive that it was not possible to manipulate the file because the paper was too fragile and some parts were stuck together by heat. The file was sent to the restoration department where it was completely repaired and conserved. The paper was strengthened to such an extent that it was possible to reorder the folios and prepare the complete file for the digitisation process. The file contains materials about the case of Karel Vitoul, a waiter, who was sentenced to death by the Special Court in Dresden. He was a member of an organised group that had stolen many pieces of luggage from trains and railway stations in Germany. The court also mentioned that Karel Vitoul took advantage of wartime and the fact that railway transport was blackened out. He was executed on 22 September 1942.

The file contained many fragments and it was therefore necessary to organise the folios as usual with similar files.

As an aid in determining the correct order of the folios, the archivist wanted to use a randomly selected nearest digitised signature – 141-170-12. Coincidentally, it was also seriously damaged by fire. It was therefore impossible to use it for the purpose.

When reviewing the order of pages of the file 141-173-10, several documents at the end of the file, the back cover and several folios, including two other different police photographs, were found to have been also damaged by fire. The shape of the damaged parts did not match the preceding documents. The numbering of the documents and photographs seemed to belong to another case. The archivist decided to recheck the already digitised file 141-170-12 and found that the damaged parts have remarkably similar shape as those from the end of file 141-173-10.

The file 141-170-12 contained folios and fragments damaged by fire in the cover sheets, and the materials pertained to the carpenter Jan Vyhnánek. The condition of the file was identified in 2019 and its complete repair and conservation were finished at the beginning of 2020. Jan Vyhnánek worked in Leipzig, where he was sentenced to 10 years of prison for robbery in March 1942. In June 1942 his case was reopened. New facts regarding his criminal activities were given, and he was subsequently sentenced to death. His execution took place on 10 September 1942.

Coincidentally, more than 60 years after the first cataloguing of the collection, it was possible to reconstruct the preserved parts of the files, and return the incorrectly placed files and photographs where they belonged. The executed Jan Vyhnánek was again given his true face. The part of the archival material that had been seriously damaged by the fire was conserved by the Restoration Department of the Security Services Archive and is now preserved for future generations. 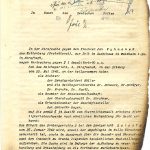 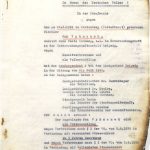 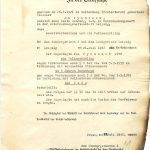 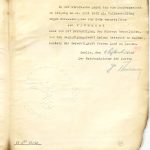 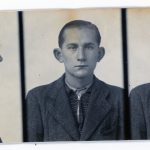 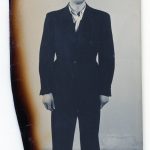 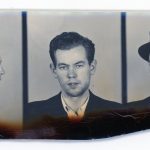 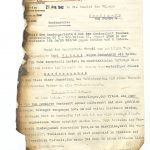 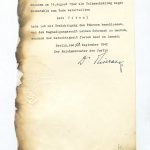