The idea of the so-called Socialist Work Brigade emerged in the 1950s in the USSR, where the Communist Work Brigade was established in 1958. By the end of the 1950, voices came to be heard of the “unaware people” that eroded the society by discouraging others to fulfil or exceed the determined objectives of the state plans and five-years plans. At the beginning of the 1960s, the leaders of the Central Committee of the Communist Party of Czechoslovakia slowly realised that the enthusiasm for “building up” was fading.

The leaders of the Soviet Union advised the Central Committee to establish the Socialist Work Brigade (BSP) under the patronage of the Revolutionary Trade Union (ROH) Movement, following a Soviet pattern but with a slightly different name. The former forms of competition were focused mainly on production, whereas the Brigades were to be focused mainly on education: “It is not enough to only work in the socialist way, but it is also necessary to live in the socialist way.”

The Central Committee therefore called on all workers to take part in these Brigades. It also issued directives for party units, determining when, where and how many Brigades should be established. The Brigades should be established only in those enterprises where not only diligence but also ideological loyalty of the employees could be assumed. Only such employees could be the apparent moral example for other workers. In the factories where the Brigades were established, the first meeting took place where a so-called socialist commitment was written and approved. This was delivered to the factory or enterprise leadership for confirmation.

According to the terminology of the period, the “Brigade” movement was “the highest form of socialist competition” and was to be based on voluntary participation. In Czechoslovakia, this movement developed mainly during the period of the so-called normalisation of society, and in the late 1980s there were almost 200 thousand such groups with 2.7 million employees.

The competition took a whole year, with continuous formal evaluation of the individual brigades. Because of the timeframe, this competition was not designed for short-term staff, and usually only long-term work teams took part. The well-functioning participants were rewarded by bronze, silver and gold “BSP” medals. The highest form of reward was the title “Holder of the Work Order”. The team could usually use the title for one or two years. The medals were accompanied with a higher personal appraisal or preference in using company recreational facilities.

These “Brigades” can also be found in the collections of the SNB (National Security Corps). For example, in the collection code M 1-1 (II), Regional Directorate of the SNB in Hradec Králové, materials have been preserved of the competing brigades in the Car Workshops, Canteen, Auxiliary Services, Ruda hvezda Sports Unit in Pardubice and Kounov and other SNB units, including the State Regional Archive in Zámrsk. 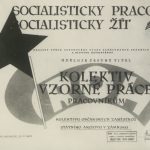 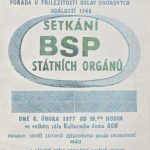 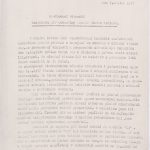 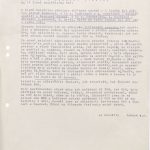