Psychotronics in the Czechoslovak People’s Army

Clairvoyance, telepathy or psychokinesis are phenomena that are examined by psychotronics. For many people these are myths or fiction. However, a Minister of National Defence at the communist era, colonel general Milan Václavík, was not so sure about that.

During the Cold War it was necessary to be ahead of the enemy in terms of being well informed. It was mainly the information about the enemy’s weapons that was most valuable. It was a priority for the army to search out and examine all the available means that would lead to finding out the desired information. Psychotronics seemed to be an appropriate way: sensitive people should have been able to recognise the location of underground ammunition or aircraft.

That’s why the aforementioned Minister of National Defence Milan Václavík instructed general staff’s chief, colonel general Miroslav Blahník, to acquire pieces of knowledge about psychotronics and its possible applicability in the army. The instruction was issued on 6th September 1985. The fact that the Czechoslovak people’s army cooperated with the Czechoslovak Academy of Sciences and Slovak Academy of Sciences on this task and even requested assistance from the Intelligence Directorate of the General Staff of the Soviet Union and the Intelligence Directorate of the General Staff of the German Democratic Republic for cooperation in this matter shows that it was a task of great importance.

On 24th October 1985 a report to the chief of the general staff was presented where the chief of the Intelligence headquarters, lieutenant general Brož, informed about the development of psychotronics in the Czechoslovak people’s army. In this report he suggested to permanently monitor the usage of psychotronics for military purposes via Intelligence Department of the General Staff and to establish a scientific research centre directly in the Czechoslovak People’s Army. However, before establishing this specialized centre, the matter should have been discussed with the relevant authorities of the Soviet Army.

On 31 October 1985 a report for the Ministry of national defence of the Czechoslovak republic was authorised by lieutenant general Brož which mentioned the outcomes of scientific research in psychotronics in some “capitalist” countries (USA, France and Germany) and about involvement of sensitive people in military affairs, mainly in searching for people and ammunition. The Brož report also mentioned research based in the USA that was focused on the human biological field and also about the effort of the US experts to develop technical means that could replace sensitive people.

These reports are lodged with the Security Services Archive in an as yet unprocessed collection entitled Intelligence Department of the General Headquarters of the Czechoslovak Army. 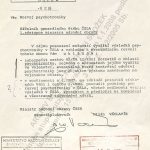 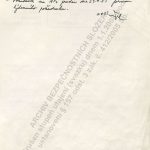 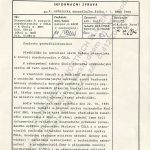 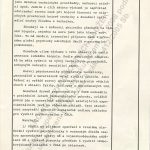