Disinformation and Operative Camouflage in the Czechoslovak People’s Army (CSLA)

The disinformation activity and operative camouflage in the Czechoslovak People’s Army was carried out on the grounds of a document called “Plan of disinformation measures and operative camouflage” that had been always made for a specific training year (for example, the period 1984–85). This plan specified another document called “Intention of misinforming the Czechoslovak People’s Army enemy for the years 1981–1985” for the last period it was in effects, and was based on the tasks assigned to the Ministry of National Defence, and also on the conclusions from the sessions of the Committee for Central Control of Disinformation and the underlying documents supplied from the Federal Ministry of the Interior.

The Plan of the main disinformation measures and operating camouflage for the specific training year was approved by the Chief Commander of the General Staff and the Deputy Minster of the Interior of the CSSR. The Plan was divided into several areas: Part I. – military area, where the main task was, for instance, to misinform the enemy’s special services of operating and tactic trainings, the command system, the organisation of air defence system, stationing of troops, etc. Part II. – military policy area, where the main task was to provide the enemy with information “promoting the positive approach of Czechoslovak citizens to building up and defence of their homeland”, the high degree of “moral and political condition of the Army staff”, information supporting wrong focus of psychological war operations, etc. Part III. – military economy area, where the main task was to confuse the enemy as regards the intentions and results of selected scientific research areas and production facilities of the Army as well as the industry working on the engagements for the Ministry of Defence, and to misinform of the used and newly implemented armour, military equipment, etc. Part IV. – organisation and managerial work, where the main effort went to the preparation and completion of the document entitled “Intention to Misinform the Enemy of the CSLA”, to be approved by the State Defence Council, and also the preparation of underlying documents for the sessions of the Committee for Central Control of Disinformation, etc.

As an example of the fulfilment and implementation of the aforementioned plan in Part II., i.e. the military policy area, a document entitled “Implementation of the Resolution of the 16th Session of the Committee for Central Control of Disinformation on Discrediting a former CSLA office Z. Cerovsky” which was originally classified as Top Secret – Special Importance. Based on the session and resolution of the 16th session of the Committee, the alleged anti-regime activity of Zbynek Cerovsky was monitored, and the possibilities of discrediting him were considered. 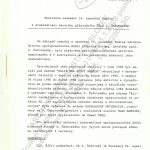 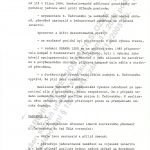 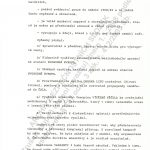 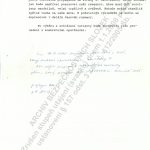 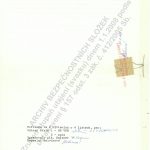