There was not much space to criticize the regime neither in Czechoslovakia nor in the whole Eastern Bloc during the times of the Communist Party rule. Questioning the government’s successes and ridiculing communist statesmen in public was perceived as an unwanted phenomenon. According to Sect. 104 of the Criminal Code 140/1961 Coll. it was possible to punish a person for defamation of a socialistic state and its representatives by up to two years’ imprisonment.

A proof that even trivial things in this matter were taken seriously by the regime could be an investigation into a small piece of paper where the Soviet leader Nikita Khrushchev was depicted as a maybug and frog. A small perforated piece of paper, to which the head of the Soviet leader was glued, was discovered on 20th February 1962 on the notice board of the post office in Náchod. The documentation in the form of the investigation file is part of the collection entitled Subject Files, stored under no. OB-136 HK, with the cover name „Post Office“.

The piece of paper, 7 x 10 cm in size, was discovered on that day by the post office deputy director Petr Franěk on returning from the meeting of the District Committee of the Communist Party. It was glued to an advertising poster from the Technicke noviny magazine. He removed the damaged poster immediately, replaced it with a new one and informed the Public Security Corps. The local district department of the Ministry of the Interior immediately launched the search for the unknown perpetrator. The suspects were the post office employees and also another 40 people who, during the absence of the post office deputy director that took one hour, visited the post office counters and were therefore identifiable.

The damaged poster was sent for expert examination that should identify the glue with which the head of Khrushchev was attached to the poster. One evening in April of the same year, the desks of all post office employees were searched. Nonetheless the offender used quite a common glue, which made the search difficult. It was also difficult to track the paper at the post office. For these reasons the investigation was closed and the file with the reg. no. 5868, code name “Post Office”, was put in the archive. It is interesting that the investigators saw the caricature as depicting Khrushchev primarily as a frog, although it also partially shows the maybug (“khrushch” in Russian). It seems that this connection wasn’t probably noticed by anyone.

There were many similar defamation cases on the party officials and representatives in the Eastern Bloc countries. In connection hereto, it is worth mentioning another case, the investigation into a discovery of a traffic patrol disc with an inscription “Brezhnev is swine” found in April 1969 (see investigation file V-5461 BN). Both stories from the archival materials are only a marginal example of how the state tried to suppress the resistance in society. 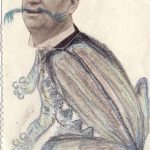 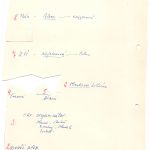 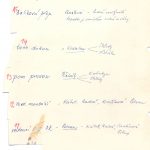