All My Compatriots, or the Case of František Slimáček

The 1960s saw a breakthrough in the Czechoslovak cinematography. It was initiated by the arrival of the new young generation of filmmakers, graduates of the Prague Film Faculty of FAMU (Film and TV School of the Academy of Performing Arts in Prague). These young filmmakers brought to Czechoslovak cinematography a new progressive style that stirred up the waters of the rigid and primitively ideologised filmmaking of the previous years in Czechoslovakia. This new radical stream was called “the new wave”.[1]

One of these filmmaker revolutionaries was the director Vojtěch Jasný, distinguished mainly by his movie All My Compatriots. The movie was made in 1968. It premiered in 1969, at a time when Czechoslovakia was already occupied by the five armies of the Warsaw Pact, and afterwards, during the times of the so-called normalisation of society, the film was placed in the vault as one of the many banned movies for the next twenty years. The movie openly criticizes the situation in Czechoslovak rural areas after WWII, during the 1940s and 1950s, mainly the collectivisation of Czechoslovak agriculture and the related regional policy of the Czechoslovak Communist Party.

The movie was based on a true story from Kelč, a small Moravian town situated 14 kilometres from Valašské Meziříčí. However, it was filmed mainly in Bystré (the Svitavy region) and in Sněžné, near Žďár nad Sázavou. One of the main characters is the farmer František, played by the famous Czech actor Radoslav Brzobohatý. František opposed the collectivisation and came to personify the resistance and disobedience against the local Communist leadership. He also became an example for other farmers in town. For these reasons the communist leaders needed to get rid of him and had him arrested. Nonetheless, Jasný’s movie does not make it clear what the formal reason for the arrest was.

The inspiration for this character was the real František Slimáček from Kelč, who was arrested on 27 October 1949 by the local security forces for allegedly having traded in meat. At that time, Slimáček was working as a butcher’s assistant in Kelč. He was single (unlike the film character) and a car accident during his military service in 1946 left him partially disabled. He was not a member of any political party.[2]

After his arrest, Slimáček was transported to the district prison in Valašské Meziříčí, where he became ill. Subsequently, he was transferred to the public hospital in Hranice, from where he escaped on 11 November 1949 (the escape was also mentioned in the movie). After that, he spent two years hiding in the house of his brother and his parents. [2]

In October 1951 the State Security stepped into the case, also because he was suspected of being part of alleged anti-regime activity as a member of the “Hory Hostýnské” group. The Regional Headquarters of the State Security in Gottwaldov, then based in Uherské Hradiště, issued an order for the arrest of František Slimáček on 31 October 1951. His parents’ house was searched on 1 November 1951; František Slimáček was arrested and transported to Uherské Hradiště, where he was interrogated on the same day by the State Security.[2]

In his statement he claimed to have been unjustly accused. He stated that the main reason for his prosecution was an old ownership dispute between his father and one of the members of SNB in Kelč, and his critique of the economic activities of the Local Council. He partially admitted some degree of guilt as regards driving without a licence and damaging the car he had borrowed. He also mentioned that he took part in the anti-Nazi resistance during WWII as part of the “Nikolai” partisan group.[2]

The State security’s investigation did not discover any anti-regime activity by František Slimáček. The District Prosecutor’s Office in Valašské Meziříčí therefore issued an order on 8 January 1952 to have František Slimáček escorted to the Regional Court Prison in Uherské Hradiště, where he was imprisoned the next day for his alleged criminal activity.[2] 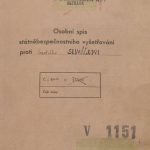 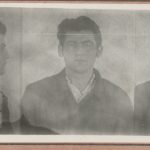 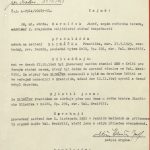 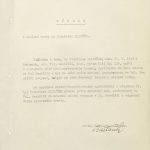 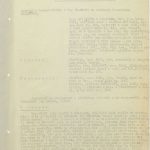 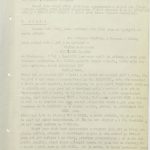 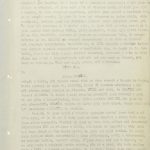