The collection of State Security Investigation Headquarters – Investigation Files includes, under no. V-2522 CB, an investigation file with an unknown offender who allegedly should have committed the offence of defaming a state of the world’s socialist system. The file contains a confiscated and seriously damaged state flag of the USSR that was originally stored in the warehouse of the Agricultural Construction Enterprise in České Budějovice, South Bohemia. The Soviet flag was inappropriately used to mark off an oversized cargo during transport.

The driver of the truck allegedly took over this “red warning flag” for his cargo in the warehouse on 26 June 1970. Criminal proceedings were started to identify the offender of this politically motivated offence. The investigation group of the Public Security Corps passed the case onto the State Security Investigation Service. It turned out from the driver’s interrogation that no red warning flags were available in the warehouse, and he therefore had to look for “any available red cloth” to tie to the cargo as a warning sign required by the traffic laws. He stated to have found this “piece of cloth” in cleanup waste from the Řempo national enterprise. The investigation continued several months afterwards, nonetheless in March 1971 it was stopped because no offence was actually committed. 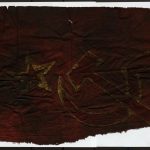 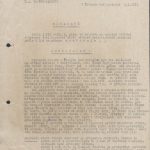